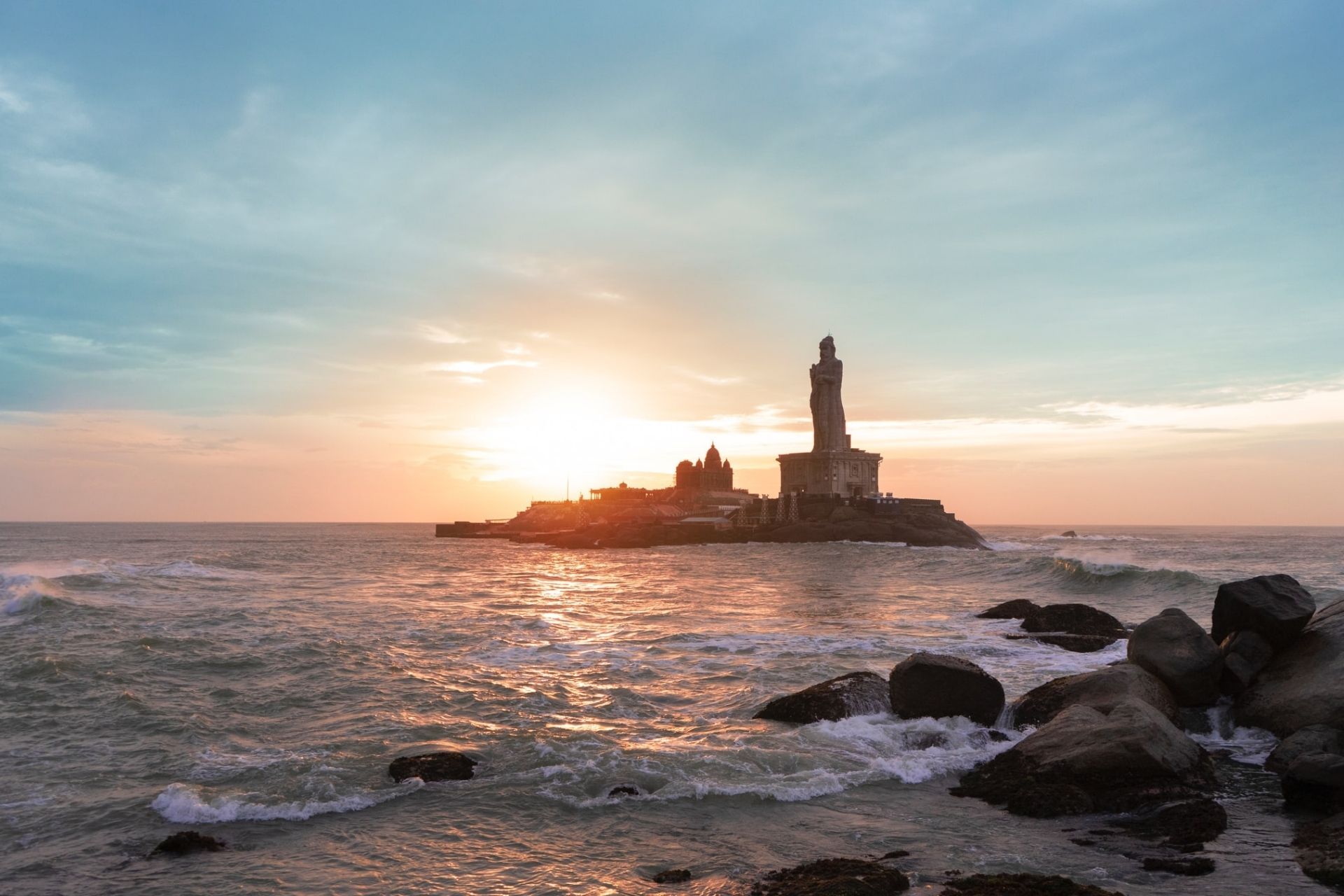 Known to be the most southern tip of India, Kanyakumari is a place for every traveller lover. Whether you are travelling with family or with friends, Kanyakumari tour is sure to offer you with a wide array of holidaying choices. In the state of Tamil Nadu, Kanyakumari is the mainland on the Indian Ocean, forming last tip of the Indian subcontinent in the shape of V.

Boasts of being one among the few places in India where one can witness sunset and sunrise at the same location the town of Kanyakumari has many special features that makes it apart from other tourist destinations. Adding to this is the fact that on full-moon days, one can see sunset and moon rising at the same time. Along with all this, the scenic beauty of vast spread of ocean and shimmering beaches; one of the most sacred temples Kumari Amman temple; historical and cultural legacy; Vivekananda rock memorial and many more places to see in Kanyakumari makes visit to this town a must. The charm of Kanyakumari is such that this beautiful destination is included in almost every South India tour package.

History and Geography of Kanyakumari

Southernmost point of Indian Peninsula, Kanyakumari is located in the state of Tamil Nadu. This town that has been known since the Sangam Period has a rich historical and cultural background along with its unique geographical location. The name Kanyakumari is derived from the celebrated temple of Goddess Kanya Kumari.

Previously known as Cape Comorin, Kanyakumari has a rich historical background where it has seen rules of various dynasties, traces of which can be seen even today. It was during British rule when the town of Kanyakumari became Cape Comorin.

Kanyakumari has been ruled by various kingdoms such as Cholas, Chera, Pandyas and Nayakas which has resulted in its historical richness that one can see here. The arrival of Christianity in AD 52; the start of Islam and Jainism has also contributed to its literary and architectural legacy. It was in 1947, when the rule of Travancore ended as this town merged with the independent India. In 1956, as per the Indian States Reorganisation Act of 1956, Kanyakumari district became a part of Tamil Nadu.

Tourism Places to Visit in Kanyakumari

Kanyakumari, the town of rich cultural, religious, natural and historical beauty presents a wide array of places to see. If you are wondering which places to visit in Kanyakumari then you can need not stress yourself as this town has many interesting option to keep you engaged, varying from historical to scenic to religious places.

Kumari Amman Temple is undeniably the most popular place to visit in Kanyakumari. Dedicated to Goddess Kanyakumari as a virgin Goddess, this temple is said to be more than 3000 years old. Goddess is said to be constantly protecting the shores and its people. Devotees come here to seek blessing of the Goddess. Its architectural excellence also attracts tourists from all over the world.

Another place to see in Kanyakumari is the Vivekananda Rock. Built in 1970 in the memory of great saint and leader Swami Vivekananda, this rock stands majestically, captivating every visitor. Next to rock is the Sripada Parai, which is believed to be the holy footprint of Goddess. Thiruvalluvar Statue is another attraction that you cannot miss on Kanyakumari tour. This 133 feet long stone statue, symbolic of the 133 chapters of Tirukkural, is built in the memory of great poet and saint Thiruvalluvar. Gandhi Memorial where ashes of Mahatma Gandhi have been kept is a unique place to visit and understand the life of one of the greatest men in Indian history. Mahatma Gandhi has come to Kanyakumari in the year of 1925 and 1937. More than 1000 years old Guganathaswamy Temple where inscriptions of 11th century can also be seen is another place to visit in Kanyakumari.

Also known as Circular Fort, Vattakottai Fort is sure to captivate you with its architectural excellence. Built in 18th century, this fort is also known for the beach nearby which has black sand. Another fort to visit is the Udayagiri Fort, located 34 km from Kanyakumari, which was built in 18th century by King Marthanda Varma. Suchindram located 13 km from Kanyakumari is also an integral part of Kanyakumari tour. The Sthanumalayan/Thanumalayan Temple attracts devotees from everywhere. Built in 17th century, this temple is dedicated to Lord Shiva, Lord Vishnu and Lord Brahma. Nagaraja Temple, dedicated to Serpent Lord Nagaraja, is another popular shrine to visit. Built in 15th century, St. Xavier’s Church is an equally renowned shrine to visit. Padmanabapuram Palace, Government Museum and Mahadevar Kovil are a few more interesting places that are worth visiting on your tour to Kanyakumari. While places like Thirparappu Waterfalls and Kanyakumari Beach present breath taking scenic beauty adding a refreshing touch to your tour.

Located around 705 km away from Chennai it can be reached within 10 hours of time via road. Kanyakumari is well connected to the rest of the country via railways and roadways. There are many regular trains running between Kanyakumari railway station and other prominent cities of the country. There are direct trains from all the important cities such as Bangalore, Pune, Chennai, etc. If travelling via air, then Trivandrum at a distance of only 90 km is the nearest city to Kanyakumari. Thiruvananthapuram airport is the nearest airport in Kanyakumari. It can be reached within a drive of around 2-3 hours.